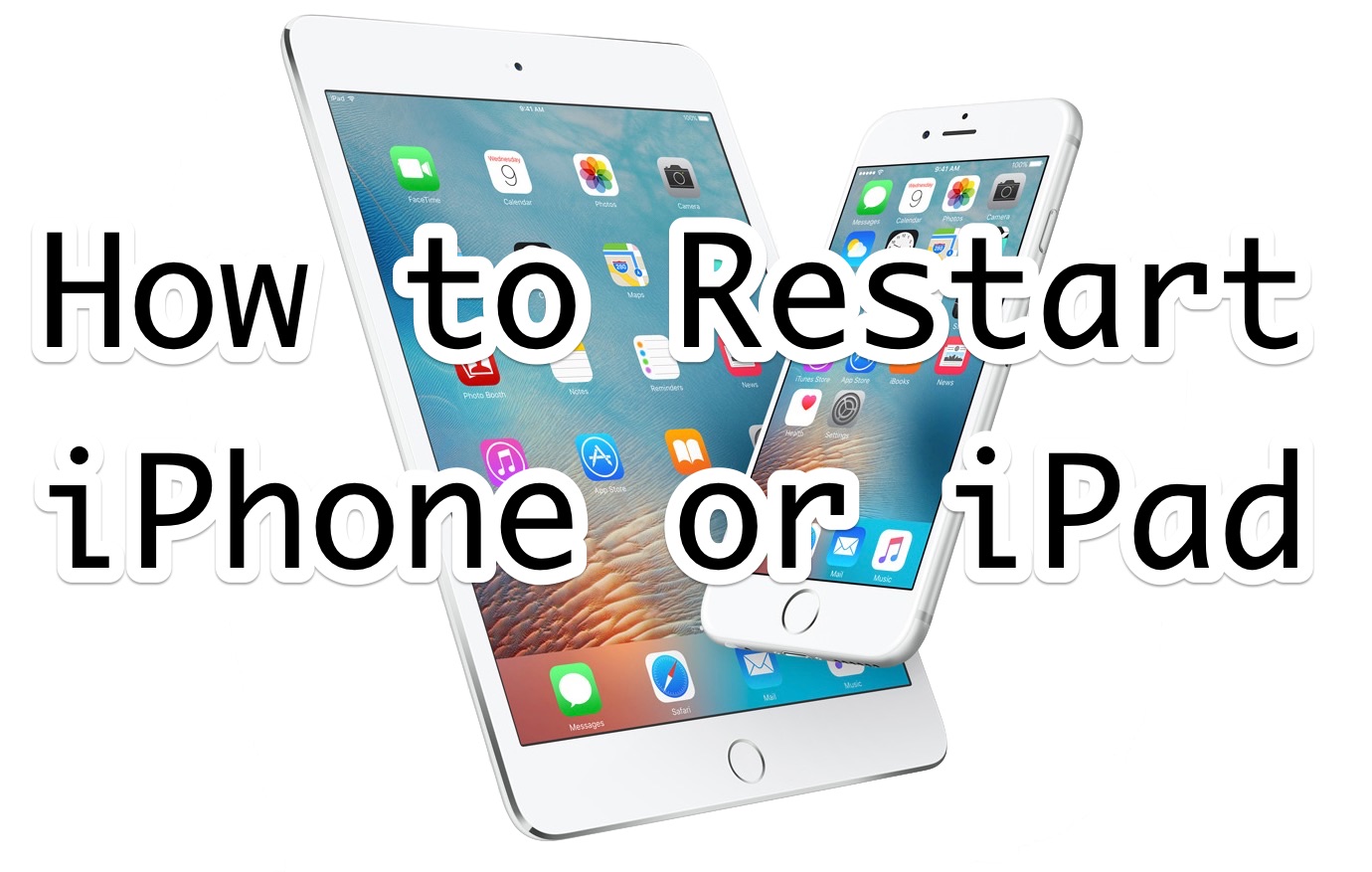 Some occasions may call for a user to restart an iPhone, iPad, or iPod touch. Typically restarting an iOS device is a troubleshooting step, but it can be useful for some other situations as well.

To be clear, what we are covering here is a regular traditional system restart of an iPhone, iPad, or iPod touch, often called a soft restart. This means the iOS device will turn itself off, then turn back on again, restarting the iOS operating system in the process. This process is not the same as force rebooting, which is necessary to fix a frozen iOS device, which you can learn about for specific devices by following the links at the bottom of this article.

How to Restart Any iPhone, iPad, or iPod Touch with iOS

This soft restart method applies to all iOS versions on any iPhone, iPad, or iPod touch ever released. Here is what you do to restart the hardware and reboot the iOS system software:

Some iPhone or iPad users may occasionally encounter a strange issue where they are attempting to join a familiar wi-fi network, but iOS throws up an “Incorrect password” error message, and the iPhone or iPad refuses to join the wireless network. Often users will see the “Incorrect password” wi-fi error despite they being certain the wi-fi password is correct. Given how dependent these devices are to an internet connection, it’s understandably annoying when an iOS device doesn’t join a wi-fi network or gives you a repeated “incorrect password” message.

This walkthrough will aim to troubleshoot and fix the annoying “Incorrect password for network” error messages on an iPhone or iPad when trying to join a wi-fi network.

Wait! 4 Common Reasons Why You Will See the “Incorrect Password” Error

Before proceeding any further, be sure you cover the following bases:

You might think those recommendations are goofy, but many people incorrectly type a wi-fi password, or have the CAPS LOCK enabled when entering one, or perhaps they hear a word or phrase incorrectly and are typing the wi-fi password wrong. For example, if a wi-fi password is “Burrito123” then it must be entered exactly as that with the proper capitalization, otherwise you will see the ‘incorrect password’ error. It’s also not uncommon for people to be trying to join the wrong wi-fi network, so entering a correct wi-fi password but on the wrong access point is not going to work.

Assuming you have the proper wi-fi password and the proper network, and you are still seeing the incorrect password message, proceed to trouble shoot the issue in iOS.

We’ll cover a variety of troubleshooting tips and tricks to resolve the “Incorrect Password” error message when attempting to join a wireless network in iOS.

1: Reboot the iPhone or iPad

Sometimes simply restarting the iPhone or iPad can resolve strange network connection issues, including an inability to connect to a wi-fi network.

When the iPhone or iPad has started up again, go ahead and try to rejoin the wi-fi network again.

2: Forget the Wi-Fi Network, then Re-Join

3: Reset iOS Network Settings on the iPhone or iPad

Resetting the iOS Network Settings clears all wi-fi and network preferences and settings from the device. The downside to this approach is that you will lose any remembered wi-fi passwords, custom settings and configurations, and other remembered network data.

Resetting network settings can often fix many annoying connectivity issues in iOS, often including the “incorrect password for network” error, an ambiguous “unable to join network” error, amongst others.

After you reset network settings, you may need to reconfigure various iOS networking components again. For example if you use custom DNS on the iPhone or iPad, manual DHCP configuration, use a VPN, a proxy, or if you had many networks remembered along with their passwords, all of that data would need to be entered manually again after a device network reset.

4: Restart the Wi-Fi Router or Modem

Restarting a router or modem is not always possible however, particularly in many workforce or public environments. So while this approach may be fine in a home or small office, it’s not practical at an airport, office, or public space.

This is a bit more advanced and requires modifying the wi-fi router or wireless access point, but some users report success with: changing the wireless routers channel width, usually from 20mhz to 40mhz or 80mhz.

The process of changing channel width varies per router, but will require admin access to the wireless access point. You can find your router IP address from iPhone or iPad with these instructions if you are not certain of it.

A great new feature available on iPhone or iPad running newer versions of iOS is the ability for anyone to share a wi-fi password with another iPhone or iPad that is nearby.

If you or someone else is in a situation where an iPhone or iPad user is repeatedly getting the “Incorrect password” error message when trying to join a network, and you and the other device is on a new iOS release (iOS 11 or later) then you can use the Share Wi-Fi Password feature in iOS to share the password with that person and allow them to join the network without having to type the password manually themselves. This is particularly effective if someone is prone to typos or CAPS LOCK, using an alternative keyboard, and other similar situations where some user error can be involved in the failure.